You Guys were expecting too much out of this Game, weren't you ? I doubt EA actually made this Game for the Fans of the Genre from the past few years. This Game was purely made to attract new Gamers to the scene.

We have had loads of World War II shooters and I doubt any guy who has played MOH : Allied Assault and it's expansions, MOH : Pacific Assault, Call Of Duty I & II & III (Console Exclusive) would want to go for another WW2 Shooter anymore. This Game has it's Faults, maybe too many but it delivers what it promises.

It's the Fun Factor that will leave you in awe in the beginning and ending of every Mission. The "First" Three missions are linear, simple and straight forward. When you reach the Third Mission, you know that the "real" Game has taken off. The Music, the adrenalin rush is what gets the Game going later on.

The Music, The Graphics, The Level Design and THE GUNS !! The Music as you may expect from EA has been delivered and every one will be reminded of the Band Of Brothers Music. There are times in Certain levels when the Background Score really picks up and the situation is portrayed beautifully through the Music. Eg. Landing in Market Garden, seeing Hundreds of Airborne Troops landing together around and the amazing Music just leaves you in awe of the magnitude and beauty of the situation around you. In the Last mission, probably IMHO the best Beginning ever to a Last Mission ever in a Game. The only Words that come out is, "No f%^in way !!!" Since the Game is made on the UE3 ( Unreal Engine 3 ), you can expect Great things from it and it delivers. The Cities are gorgeously shown, the Player Models also look Fabulous. If you really want to know what I am talking about, just zoom in with a Sniper Rifle on a German Soldier and see the expression on his face while shooting or while getting shot at or while giving commands to his fellow mates. The Levels looks beautiful too, the last three levels of the Game are the best looking levels I have ever seen in a long time.

For new players it has to be the AI : The AI run fast and mean, spawn out of places you have already passed. They are coming in huge lots and Novice players will usually get ambushed badly. Secondly, the "recoil" on the Guns, people appreciate the "Upgrade" system but i feel, it should have been the other way around ? How can you expect new players to actually start off with a Gun which has insane recoil, no registration at times. Instead people should have had the Upgraded Guns and they should have deteriorated with time if the player used it more often. So he should dropped that gun which is Jammed and what not and go for another Gun. Maybe i am talking out of my ar$e but give me a break, what the point from going from Insane to Easy, it's always the other way around isn't it ?

The Rag Doll physics are all great and what not, but as everyone has heard of the infamous Stretch Bug, well it's not really common but whenever you see it, it's kinda fugly. But don't worry go a 4 yards ahead and turn back and the 100's Nazi's you killed will disappear in a jiffy. So for the Bad, you have A gun that recoils insanely, Enemies who don't get shot too often with the insane recoil guns, enemies who charging at you so fast as if they have boosters on their feet or something. This all makes for a painful beginning for a beginner. But alas, if you get a hang of it. You will truly have a memorable experience in the latter part of the Game.

Also you will need a good PC to run this Game, the only way you will be either drawn into the Game is if you have a good PC or you have a Xbox 360.

I tried to keep the Review Spoiler free without spoiling any Story elements, maybe cause "their is no Story". This Game has it's Highs and Lows and it is fun throughout. It's definitely worth a look.

I know its kinda late, but I am working on more reviews. I hope its helpful to people who had little idea about this game.

You'll find all the famous Trackmania settings from Sunrise, Original and Nations, with countless changes and improvements.

Trackmania series has been one of the most popular and addictive online racing series, ever since its inception by Nadeo in 2003. What sets Trackmania apart from other racing games, are the crazy and insane tracks with heart stopping jumps and beautiful environments. But apart from these subtle differences there is one major difference:
There are no car collisions in Trackmania. This means that the opponent cars act as ghosts and while playing the player's car just passes through opponent cars. While this may seem wierd for some, it allows the players to focus on pure racing and not worry about opponents. In Trackmania, the Tracks are the KING, so players have to fight against the track to win. Trackmania series spans games such as "Trackmania Sunrise", "Trackmania Original", "Trackmania Nations" and now "Trackmania United".

This game was released in some parts last year. In other countries, it would be released on 23rd March, 2007.

Having played Trackmania Nations, I desperately wanted to get my hands on this one. So, I got it finally and after playing it for 2-3 hours I couldn't stop myself from writing a small review. 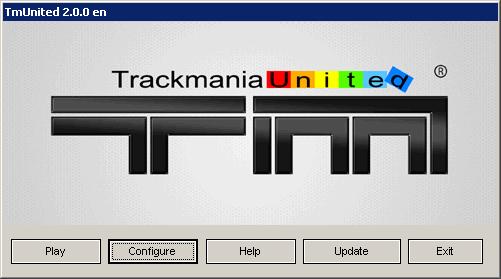 Here you configure the game settings which include performance settings, video, audio and network settings. You can also set your custom avatars by clicking on the Help button and selecting "Custom Data". The game can be started by clicking on the Play button.

After clicking on the Play button for the first time, the game took around 10-15 seconds to load fully, which according to me was pretty fast. The initial Menu screen looks cool with nice looking icons on the left. Here you can choose different gameplay modes like Solo, Multiplayer, Hotseat and LAN. In addition to these, you can connect to the huge Trackmania community by clicking on the ManiaLink button. You can also edit existing tracks using the Track Editor. 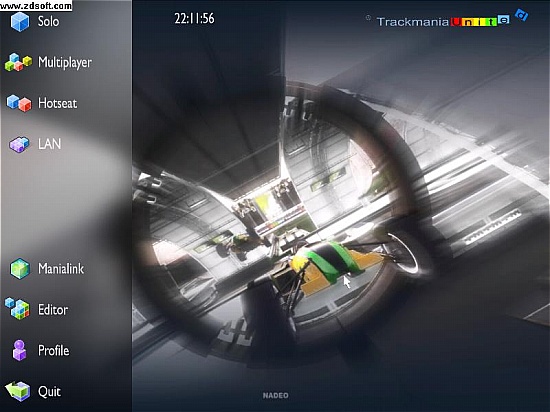 Solo mode is single player mode in which you can play alone and earn medals. Solo mode can be further divided into 3 modes :

Race mode is the heart of Trackmania. It consists of time trials in which you have to get the best timings within the allotted time to earn medals i.e. Gold, Silver and Bronze. Each medal has its own time which players must beat if they want to earn medals.

Medals can be classified in three (based on the race timings):    Gold, Silver, Bronze

One cool feature is that each medal time has its own ghost car (ghost car means that you can pass through it). So, before starting the race you can select your ghost car opponent. For example: if you select Gold time as your opponent, then you will race against the Gold time car and you have to beat it to win the Gold Medal. Once you get Gold times in Solo practice mode, you can switch to the Official mode so that you can compare your timings with other Trackmania United players.

Race mode consists of 7 varying environments i.e. Stadium, Island, Desert, Rally, Bay, Coast and Snow. Each environment has its own set of cars with different looks and completely different handling. So, if you are racing in stadium, you will get the fast Formula 1 car whereas if you are racing in Desert, you will get a completely different vehicle (a truck). The different environments are amazing and bring a real value add to the game. The graphics are quite good considering that the game is hugely scalable and can run on low end systems with basic graphics and good frame rates. 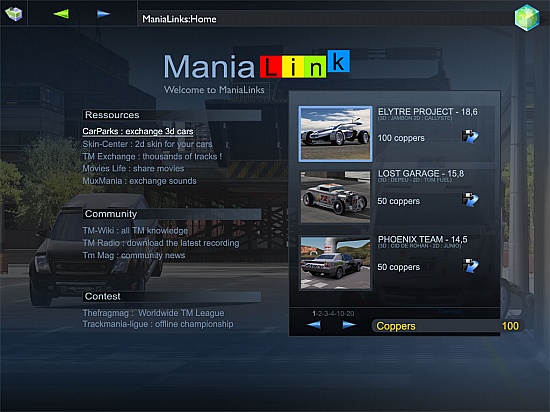 Here you will find lots of user-designed cars and tutorials for getting you started, so that you can create your own cars. 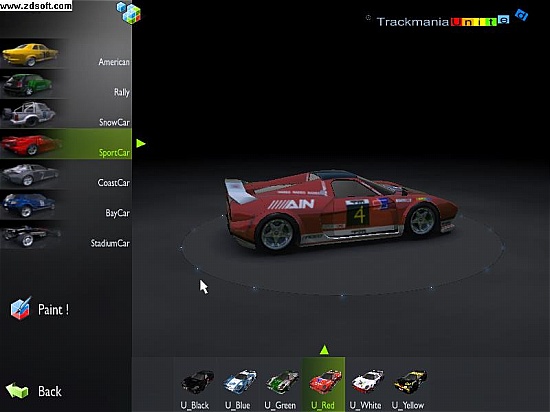 Puzzle mode has been designed to test your innovation skills. Here, you are given an area with starting and finishing points along with the checkpoints thrown in-between. You have to build the track using the given set of blocks through all the checkpoints from start to finish point. After you are through with the track you have to complete the race on the same track. The main purpose of puzzle mode is to make players comfortable with the track editor, so that they can design their own tracks from scratch.

In this mode, you are presented with random tracks and vehicles. Each track has a number of checkpoints. So, if you fall of a bridge or get enveloped in water, you can just restart from the previous checkpoint. Your job is to complete the race using less than 10 restarts. This might sound easy but with Trackmania’s insane tracks you can never be sure. You have to race with extreme precision to complete the race. All in all platform mode is a good value-add to the game.

Once you are through with the Solo mode and want some real competition, check out the multiplayer mode. Multiplayer mode gives you a chance of testing your racing skills against the best players in the world. Here you can earn “Coppers” by winning races, sharing vehicles, screenshots and videos with other players. Trackmania United has a unified ranking system like Trackmania Nations, though I wasn’t able to check it out. Having played Trackmania Nations earlier I know that the multiplayer mode is extreme fun and can be really addictive, so play it at your own risk.

The soundtracks in Trackmania United are similar to Trackmania Nations. The sounds are good but get repetitive after a while. The music sounds quite good on my Sennheiser HD485 cans. I couldn’t find an option of customizing the soundtracks though. 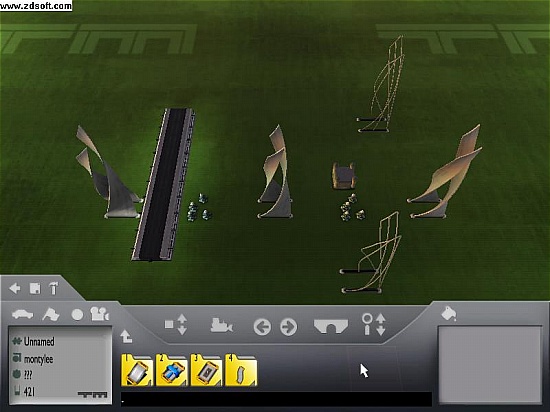 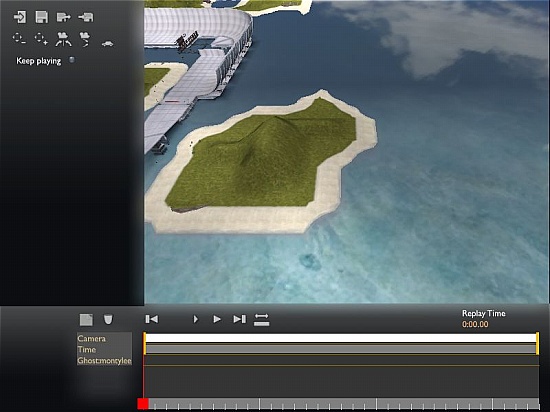 The Trackmania United designers have done a great job in providing some cool little extras like:

All in all, this is an excellent racing game with lots of different vehicles, tracks and environments thrown in. The online Trackmania community really spices up the replay value of the game with innumerable number of maps, vehicles and add-ons. Once you get the hang of the game, you are sure to get hooked. The inbuilt track editor can bring out the game designer inside you and utilize your creativity to the fullest.
On the flip side, the multiplayer mode can be a bit difficult for beginners as user created tracks are really insane and almost everyone would seem to play better than you in the beginning. But with practice, patience and perseverance you are bound to improve and bound to get hooked. This game has been designed by merging all other Trackmania games, so the gameplay is similar to the older versions. One would have expected some innovations on the gameplay front, so the gameplay might disappoint some. Here are the positives and negatives: