Dynamic Overclocking overclocking is a feature which will increase your CPU/GPU-Speed if needed and when needed. It brings you extra performance while system is heavy-loaded. Diagnosing system's utilization to active the performance enhancement, make the ultimate personalized system possible.

You can achieve extra performance while you're playing 3D games and vector rendering. You don't have to raise the frequency and voltage for all-time because it will burden your PC system. Some people may concern their system always under intensive status. You can acquire additional performance within the tolerance when you need it.

There is also another advantage to 'noob' users who want to overclock they system but either don't know the exact procedure of the art of overclocking or too afraid to do so, specially when companies doesn't support warranty over overclocking damages. All they have to do some clicking to achieve some overclocking boosts to their system.

Two major motherboard manufactures introduce this feature named D.O.T. and C.I.A.
Let us do an in-depth analysis of the feature and compare them.

Have a look at the original description of D.O.T. taken from MSI's website.

What is the Dynamic Overclocking Technology? Many mobo users must feel curious about this question. Dynamic Overclocking Technology, in simple words, is the automatic overclocking function, included in the MSI's newly developed CoreCell Technology. It is designed to detect the load balance of CPU while running programs, and to adjust the best CPU frequency automatically. When the motherboard detects CPU is running programs, it will speed up CPU automatically to make the program run smoothly and faster. When the CPU is temporarily suspending or staying in the low load balance, it will restore the default settings instead. Apparently, the Dynamic Overclocking Technology will be powered only when users' PCs need to run huge amount of data like 3D games or the video process, and the CPU frequency needs to be boosted up to enhance the overall performance. On the contrary, when your PC stays in the normal status such as surfing on the Internet or doing hard drive defragment, CPU will remain the original speed without overclocking.

MSI wasn't alone in its initiative, as Gigabyte's C.I.A. (CPU Intilligence Accelerator) is called to solve same problems. The description provided in company's press release resembles that of MSI D.O.T. much:

...C.I.A. (CPU Intelligent Accelerator) is designed to detect CPU loading during software program's executing, and automatically adjust CPU computing power to maximize system performance. During loading high CPU resources consumption tasks, such as video and audio encoding programs or thrilling 3D games, the CPU requires more CPU computing power; when C.I.A. is enabled, it will detect the current CPU loading and automatically accelerate the CPU computing performance, thus allow programs to execute faster and smoother. On the other hand, when the programs are terminated, the CPU will return back to its initial status...

Gigabyte avoids specifying the parameter that C.I.A. controls. Instead of and unambiguos "...adjust the best CPU frequency..." of MSI, they use an indistinct "accelerate the CPU computing performance". However we don't know other means of doing this except for overclocking and therefore think it's pure casuistry.

But the aim that is to detect the load balance of CPU while running programs, and to adjust the best CPU frequency automatically sets the obvious question: how is it possible to determine CPU load only with a main-board without any additional software running. This is not trivial.

The most correct way is to analyze the instructions transferred via CPU bus. But such a solution will cost a fortune and will require an extra processor, at least equal to the primary CPU. Therefore, MSI must be using some other method. But what? We thought of an idea, but it was so primitive that we decided to check it just to make sure we were wrong...

Initially we intended to briefly introduce the candidate to become another utility of the RightMark project, RM Spy or RM Infiltrator (not settled yet). This program helps CPU and mainboard testers determine CPU clock at any moment. As you know, some board makers make the default FSB clocks a bit higher in order to make their products show better performance in tests. But as we tested the program on the real test system we found out some facts that turned our simple presentation into something completely different...

The idea is certainly not original. There are a lot of programs that allow dynamic CPU clock monitoring. Here are the general advantages of ours:

So, launching RM Spy we see: 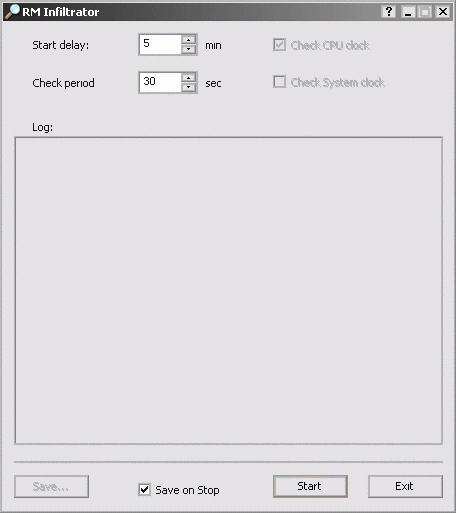 The following options can be changed in the main (and the only) program window:

The "Start" button launches CPU clock monitoring with the parameters set, while the "Exit" naturally stops the program (the same as the window close button).

On clicking "Start" the utility automatically minimizes to tray. It can be restored by a double click on the respective icon. 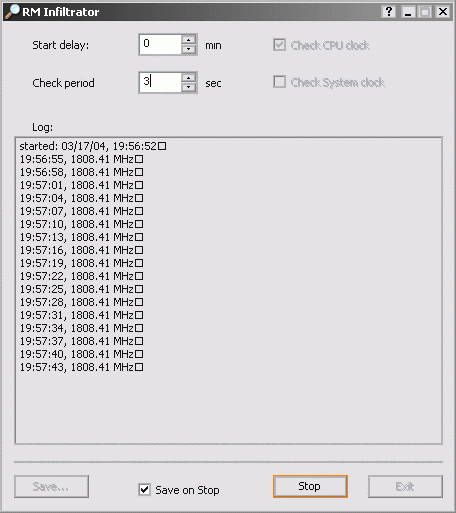 During CPU clock monitoring you will see something like on the picture above. 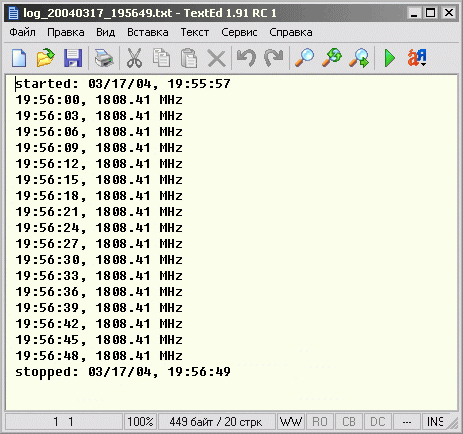 Given "Save on Stop" option was enabled, you would get a similar log clicking "Stop". As you can see, RM Spy (RM Infiltrator) has only one function, so options and modes are minimal. On the other hand, it's sufficient for the main task, namely dynamic CPU clock monitoring.

Note that the screenshots above were obtained on the PC we wrote this article on, not on the testbed. Besides, since the program is still in development, the version you might download in the future might have greater functionality than it has now.

We decided to try the RM Spy on a board that has dynamic CPU clock adjust implemented by the manufacturer.

So, below you can see the CPU clock diagram of RM Spy measurements that started right after the system boot. The CPU load was 0%, the measurement interval - 3 seconds. You can easily see the clock speed hardly changes. This means that either D.O.T. ran correctly, or didn't work at all. This diagram demonstrates D.O.T. in Return to Castle Wolfenstein (we ran, played, exited it and let the CPU stand idle for a while). Well, the dynamic overclocking works - we alternated furious shooting with calm wandering or even doing nothing, and the diagram shows that the CPU clock is adjusted. But the questions is if it's really adjusted, according to the CPU load... Now, instead of increasing the CPU load we simply stopped CPU cooler fan at zero CPU load. This is to test whether D.O.T. monitors the CPU temperature to boost. Well... the CPU clock increased!!! Then we turned the fan on again... That's it. The experiment reveals the clear dependence between the onboard CPU temperature with the Dynamic Overclocking Technology enabled and the dynamic overclocking: the higher the CPU temperature is, the higher its clock is. Certainly, there's an upper bound, but it's limited by the D.O.T. settings in BIOS Setup. And vice versa, if the CPU cools down, its clock gradually decreases to the default value.

So, taking into account that in the second part of the experiment CPU load remained constant (zero), we can state that the CPU Usage is not monitored and has no effect on the D.O.T. technology. And the CPU load is determined basing on the temperature...

Of course, we thought of checking C.I.A. as well (though we didn't doubt about it.) So, we just took the first board with this technology we could get (it was Gigabyte GA-8IPE1000 Pro2 on i865PE), a 3.2GHz Pentium 4 processor, and repeated the experiment. This time we'll be brief, as nothing new showed up. The first differences of Gigabyte C.I.A. from MSI D.O.T. showed up when we alternated dynamic and "static" moments in a game (the latter means game character stood doing nothing for about 30 seconds, having killed everyone around.) However this didn't resulted in clock rate decrease. It returned to normal only after the game application was closed. It was also clear that CPU was not overclocked smoothly (MSI), but in a single jump. Now for the cooler power turnoff... As you can see, it's the same as indicated on the previous picture. From a certain moment on, CPU clock grows even at zero load. We didn't come up with any alternative ideas and decided that C.I.A. (same as D.O.T.) monitors CPU temperature instead of its real load.

Finishing this express comparison of MSI and Gigabyte dynamic overclocking technologies, we'll state that C.I.A. seems to be more "rough". While MSI's overclocking is "truly dynamic" providing various FSB clock rates for various CPU temperatures, C.I.A. seems "triggerlike". It seems there's a threshold CPU temperature (about 45°C in our tests), after which FSB grows to a limit preset by dynamic overclocking policy set in BIOS. After this FSB remains the same until the temperature goes below the threshold.

It's up to you to decide which way is more correct. On the one hand MSI D.O.T. looks finer and more flexible, but on the other Gigabyte C.I.A. does what it's meant for as well without constant FSB changes (that are hardly good for system stability and processor lifetime.) We can debate about benefits of these approaches for a long time. But is there really any sense in it? Perhaps, some enthusiasts would like to examine D.O.T. and C.I.A. in more details, but our appetite for this theme is satisfied enough by a simple confirmation of the fact that neither technology monitors actual CPU load. Well, there are no miracles (at least hardware miracles,) and various monitoring methods are rather resource-consuming and pricey for a motherboard.

We also omitted some nuances that we couldn't make certain. E.g. are threshold temperatures hardware-fixed or variable depending on some conditions? Actually the latter seems to be more trustworthy, because if you give a processor a good warm up before tests, dynamic overclocking starts behaving strangely sometimes ceasing and sometimes overclocking the processor beforehand. Judging by this, we assume it tries to monitor CPU temperature before system starts to consider it as a base. However, this seems to malfunction, because we couldn't see any repeating dependencies.

Now let's see what makes us so perplexed. The fact that the CPU load is measured basing on the temperature? Well, no. This is a standard way of determining parameters indirectly. However, there's a more correct method: CPU power consumption analysis. It's much more correct because increased power consumption only indicates CPU load increase and isn't related to many other factors among which is the load (as it is with the temperature). However, it's much more difficult to monitor current at such low voltage than to use on-chip temperature sensor...

Ok, the manufacturer chose the temperature, and it's clear why - this is the simplest and the cheapest way. But why didn't MSI integrate some simple logic into their high-technology CoreCell chip to monitor the most widespread emergency situations, which might also cause CPU temperature growth? There are actually only two of them: 1) when temperature inside PC case grows up faster than CPU temperature, 2) CPU fan failure. If either occurs, the dynamic overclocking becomes unsuitable because CPU temperature can grow not because of the increased load, but because of some other potentially dangerous factors.

So, MSI's idea is sensible and elegant. Though it's elegant just because it's simple and inexpensive. However, its implementation doesn't make sense because it doesn't consider several obvious factors making D.O.T. toughen CPU temperature mode in emergency situations rather than prevent the unnecessary risk.

Such a crippled implementation of D.O.T. makes us think it's more a product of marketing than engineering made just to have another sound announcement...

I'd like to end this article with a standard appeal to all hardware manufacturers: "Please provide more details in your product descriptions!" It's clear that an average user doesn't need all the nuances, but experienced users should know how either feature works. Otherwise, it makes an unpleasant impression when you find out that CPU load monitoring actually tracks some other parameter that is not always directly related to the required.