The success of a company highly depends on it’s inter organization interactions and communications. In this era of technology CRM is the discipline handling such issues. This is where the use of CRM software’s come into consideration. But properly developed CRM software is not cheap. At the same time there are companies providing Open Source CRM Software.

When we talk about Open Source CRM software the most recommended company is SugarCRM. They provide a comprehensive Open Source CRM software. The software provides all basic needs of a company as expected for a developed CRM. Not only basic but many complicated functionalities can be incorporated within the system with the use of number of modules easily available over web.

While working with the software we needed a module for providing comprehensive access control over the number of applications in the system. The Open Source Software was incorporated with Role Management module. Security Suite is a suite of security features with multiple security group (team) assignments per record. Combining Role Management module & Security Suite we achieved proper access controls over the system. Accesses over applications were teams and role specific. Many such applications are available for SugarCRM over the web.

There is no such thing as Dual Channel DDR Memory Modules. Regular DDR is installed two modules at a time, each module controlled by a separate channel of the memory controller.

The following data refers to the various ways in which the dual channel controllers are implemented on various motherboards. 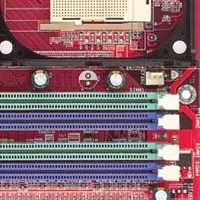 To make it easier for users to identify systems with the 2 Channel feature, MSI has considerately chosen to colour the DIMM slots differently to better distinguish them from each other. Take GNB Max for example, the green DIMM1 and DIMM3 are Channel A, while the purple DIMM2 and DIMM4 are Channel B. In order for the user to enable the 2 Channel feature, two memory modules must be plugged in different channels--one in Channel A and another one in Channel B. In the following paragraphs, we will show you the difference between 2 Channel and Single Channel in performance as well as the correct way of integrating 2 Channel memory in the various models of MSI(tm)\'s motherboard

The following pictures show you the correct way of integrating memory modules on the GNB Max (MS-6565). 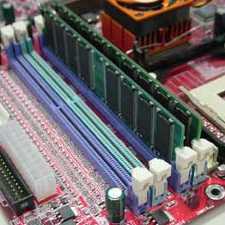 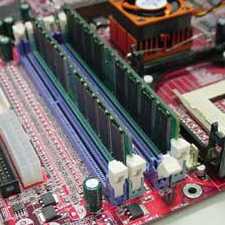 To activate the 2 Channel feature, all you need to do is to plug two memory modules in different colored DIMM slots (like DIMM1 and DIMM2). As for the performance comparison, we used Sisoft Sandra Memory for testing.

The following pictures will show you the correct way of integrating memory modules on the 655 Max (MS-6730). 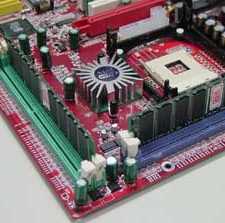 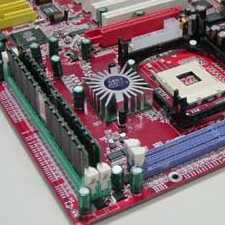 As you can see in the pictures, the 655 Max memory module layout is 90 degrees vertical with green DIMM slots on one side and purple DIMM slots on another side. To enable the 2 Channel feature, memory modules must be plugged into differently colored slots.

The following pictures will show you the correct way of integrating memory modules on the K7N2 (MS-6570). 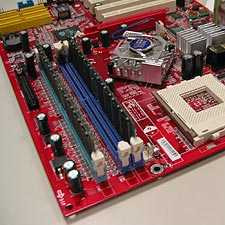 As you can see in the pictures, to enable the 2 Channel, memory modules must be plugged into differently colored slots such as DIMM1 and DIMM3. As for the performance comparison, we used the Sisoft Sandra Memory for testing.