From the very beginning Thermalright clams to be the No.1 for its air-coolers for CPU, Chipset, RAM, VGA etc. Their one of the best seller was Ultra-90 which was used with a 80mm / 90mm / 92mm fan. Then they brought Ultra-120 to support 120mm fans with it. Now, one step ahead, they launched Ultra-120 eXtreme !!

"Put the X in your Cooling System"

Thermalright name is not that much familiar in India. Very few people, specially few hard-core modders and  overclockers, know about them. Indian market is filled with coolers from Coolermaste, Asus etc. as they have a full chain of distributors and resellers. But true hardware lovers still can find jewel products. Thermalright is one of such few low profile company with long and respectable products line-up from CPU-coolers to GPU-coolers.

The product line of Thermalright has expanded as rapidly as the size of heatsinks in recent years and now appears to have over 15 different CPU cooler models in its lineup. Mix in a few chipset and VGA coolers and you have a complete cooling family.

Both Ultra-120A and Ultra-120 eXtreme do not include a backplate for AM2 systems. If you have motherboard manufactured by either Asrock or Gigabyte that utilizes the push pin method, you will need to make a separate purchase for an AM2 metal backplate . 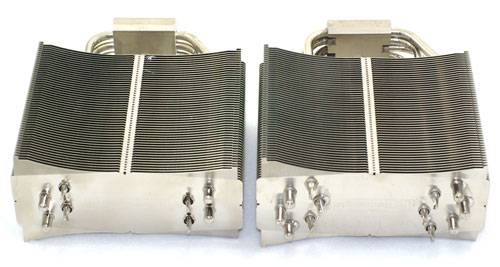 As you can see in the side-by-side comparison with the current Ultra 120, Thermalright has managed to add two more heatpipes to the Ultra 120 Extreme, raising the total heatpipes from four to six !!

As everyone knows by now, Thermalright does not believe in spending on fancy packing, its a simple but sturdy cardboard box, the cooler is held safely in between styrofoams. On top of the box, a bold label of 'Extreme'. 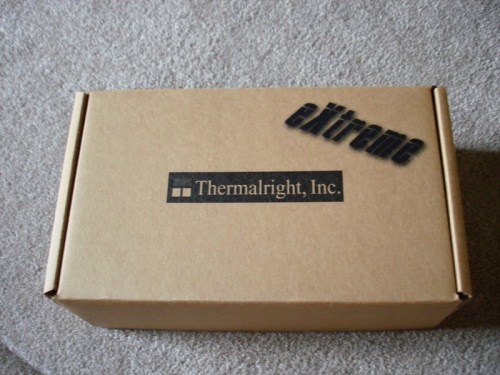 Package open and the cooler lying in its fully glory along with a full compliment of mounting hardwares. 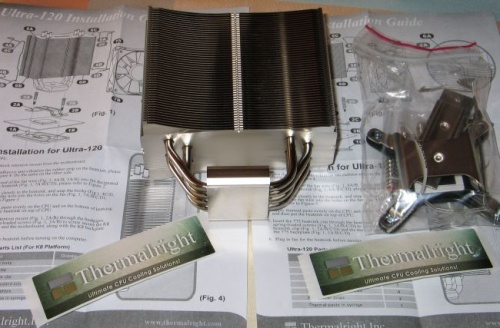 It comes with only 775 and AM2 socket support brackets, for other platforms, like 939 or 940 or 754, you would need to buy the brackets separately.

A closer look at the slightly folding or bending of the convection fins. 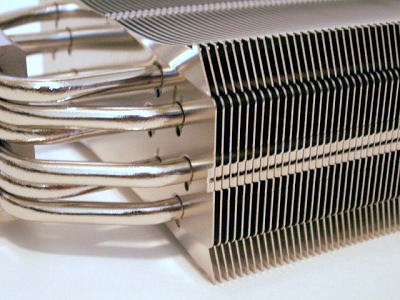 Also, we use only single-fan setup for Ultra-120. There are some mod-sites that display dual-fan setup, push-pull configuration. But, as we want to see the default power of Ultra-120, so we choose the single-fan setup.

Temperatures were measured with the help of CoreTemp .95 + SpeedFan + ASUS Probe 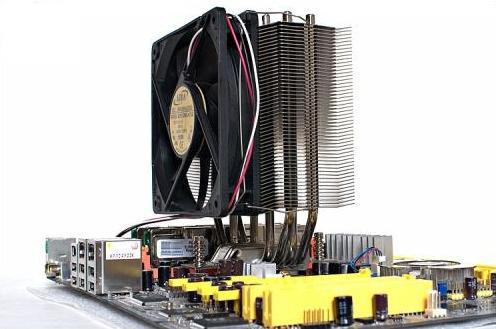 Before we start with statistics, do remember, lower the temperature better the performance.

The fan used on the Ultra120 extreme was a mere Rs. 450 Glacialtech with a high 2200 RPM throwing air @ 87.5 CFM (the fan comes highly recommended as well). If you compare the Ultra120 with Mini80 I am able to overclock higher, still within temps that is nowhere close to alarming. It simply crushed the Mini80 (which of course is not the best cooler but still not that bad after all its 'water cooling system'). Except for the stock idle temp which I was expecting to drop a bit further I am damn excited with the performance of the cooler.

According to several tech web-sites, the nearest competitor is Tuniq Tower 120 But, unavailability of the product in the Indian market, not even in gray market, there is no competition against Ultra-120 or 120E.

Now to the price part, got hold of the cooler from Todphod for an excellent price tag of Rs. 2700 + 135(shipping) compared to the price of Rs. 3700 for the CM Mini80. At this price point you cannot find any cooler which can come close to its performance and as someone says its 'Neighbors Envy, Owners Pride'