Asus will be showing off a new 8600 GT card at Computex that comes with the OCgear hardware overclocking control. If you remember the XG Station, then you’ll be familiar with the OCgear, as it looks almost identical, except that it slots into a 5.25-inch drive bay in your case, rather than being an external solution.

It’s always great to see a manufacturer that’s willing to try something new and Asus always have some wacky new ideas, but the OCgear should make it easier for those that aren’t at home with overclocking their graphics card. It’s always easier to turn a knob than it is to fiddle around with software settings, besides, we’re fairly sure that Asus has put in some safe guards so anyone that buys this card won’t break it by turning the knob too far. We’ll bring you more on the OCgear from Computex next week. 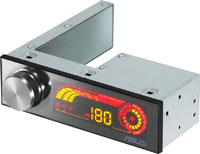