AMD will introduce a new modeling system for its processors. Under the new naming scheme, the performance rating goes away in favor of an alphanumeric model. AMD will also refer to the new Athlon 64 X2 models simply as AMD Athlon. AMD will drop the “64” suffix claiming it is no longer necessary to claim 64-bit support and allows for a shorter name.

The new naming scheme debuts early next week with the Athlon X2 BE-2350 and BE-2300 models. The new alphanumeric modeling system allows AMD to designate different models by thermal design power, processor series and speed.

The first numeral in the model number indicates the processor series and processor attributes, while the remaining three numerals indicate speed within the series and class. AMDs new modeling system names processors on a higher-is-better system. 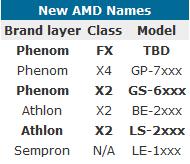 AMD Phenom FX processors will not follow the new class designations; however, AMD is undecided on the model numbers.