Today, AMD launched its much-delayed and much-awated HD 2000 series of GPU products, all of which are based on the same unified shader architecture that powers the Xbox 360. The R600, as the top end of the HD 2000 series was codenamed, is the first major new product launched after the AMD/ATI merger.

The 2000 series consists of three different GPU cores packaged into graphics card products that are aimed at three different segments: the 2900 products are for the enthusiast segment, the 2600 are for mainstream desktops, and the 2400 are for the budget end of the market. The bottom two product lines are further stratified along the lines of GPU clockspeed and the amount of GDDR3 on the card.

Most of the 2000 series GPUs are manufactured on TSMC's 65nm process, a fact that's allegedly responsible for their delay in coming to market, with the high-end desktop and mobile parts being made on TSMC's 80nm half-node process and 90nm process, respectively. The newer process technology is necessary to make these extremely large GPUs even workable, and given its ~215 watt power draw I expect that AMD/ATI will shrink the top-end, 700 million-transistor HD 2900 to 65nm or lower at the first available opportunity.

As has been widely reported here and elsewhere, the HD 2000 series shares some DNA with the Xbox 360's "Xenos" GPU, also designed by ATI. The Xenos was the first implementation of ATI's unified shader architecture (USA), which, in a nutshell, lets all of the device's execution hardware process any of the three types of graphics shader programs: vertex, geometry, and pixel.

Now, lets wait the see how the price battle between two giants nVidia and AMD-ATi takes place in Indian market. As a AMD-ATi fan, I hope that AMD will use its well known price-performance strategy. I am on no hurry, better wait for few months or one year untill true Dx10 games come out. Till then enjoy the battle and the price drop.

Just wondering what intel will do about this growing Dx10 market ??

Never heard about this, huh ? Yes of course, and this is exactly the point. You never heard about it because it was developed in the dark, and kept secret until almost fully finished and polished. Portal: Prelude, as its name states it, is an unofficial prequel to the game Portal.

Remember kids, it's not just a map-pack, it's a whole new story.

Missed the cake last time! Try for Pizza this time.

Its story revolves around the pre-GlaDOS epoch, even before she was plugged in. At this time, test subjects were monitored by real Aperture Science employees, whose work was tedious, lengthy and repetitive. This is why they decided to build a great artificial intelligence that could both replace them in these difficult tasks, and also take responsibility for many other tasks within the complex and compete with Black Mesa's superiority. All employees of the Aperture Science complex are now eagerly awaiting GlaDOS. Maybe even a little too eagerly, as the upcoming events will tell... 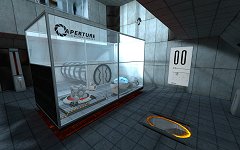 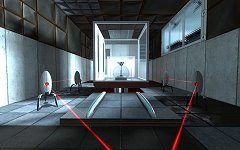 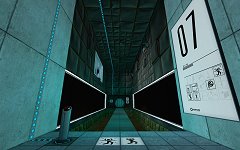 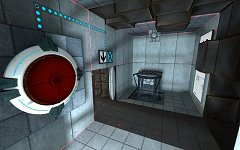 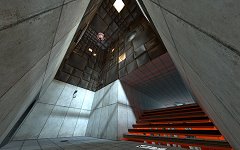 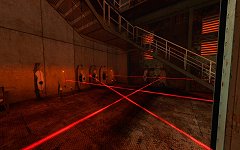 Even we were worried about the fact that Steam, the owner of Portal, can start a legal battle to stop the project and nasty things may happen.

But Nicolas "NykO18" Grevet, creator of the Mod, informed us about the Steam's response -

Yesterday, we got our first contact with the french community manager of Valve. Yes, Valve. The marvellous company that brought Portal and so much more to us for years. Don't take me wrong, I'm not trying to seduce anyone, but believe me, it was huge. I was so happy and so scared at the same time. For your information, they don't seem to bother about us doing a prequel for Portal. They're even sending us their congratulations and they seem to enjoy what we're doing. So, please guys, stop saying everywhere that Valve is going to murder us, or something.

Though this is a free game but it is based on the original Portal which is not free.

In order to play Portal: Prelude you need to have Steam installed on your system, of course. You also need to be the owner of Portal and probably either Half-Life 2, Counter-Strike Source, Day of Defeat Source or the Source SDK Base (which can be downloaded for free in the tools tab of Steam). In fact, I'm not really sure you need anything else than Portal, so I advise you to try and see, because there's no way I'm going to uninstall every Source game of my computer until it doesn't work anymore. Steam will notify you if something goes wrong...

This game is totally free and set to be released somewhere around the mid of October 2008, most likely on October 10th, the 1st anniversary of the famous Orange Box release.

It offers more game-play hours than the original Portal, with 8 chapters, 48 challenges, 6 advanced maps, a brand new storyline and more than 400 lines of speech with English and french subtitles.

Lets go back to the Aperture Science Laboratories

AMD Accelerates Award-Winning AMD platform technology, codename "Dragon", with new AMD Phenom II™ X4 Processor. Phenom II X4 955 is said to replace it as the fastest AMD CPU and a tough competitor for intel i7-940 processor, both in terms of price and performance.

Consumers can take performance to the next level with free software from AMD.
Download all now at: http://game.amd.com/us-en/drivers_catalyst.aspx

End users can experience high-end performance with Dragon platform technology from AMD, all while spending approximately $1,200 U.S. dollars less than competitive offerings. Dragon platform technology consisting of the new AMD Phenom II X4 processor, ATI Radeon™ HD 4870 1GB graphics card, the AMD 790GX motherboard and 4 GB of DDR2-1066 memory can be purchased for approximately $900 USD. By comparison, a competitive platform consisting of an Intel Core i7, x58 motherboard, 3 GB of DDR3-1333 memory and the same GPU can be purchased for just over $2100 USD. Both platforms run the most demanding PC games like Crysis™ at elite performance levels, and deliver comparable Crysis benchmark frame rates at an average of 38 frames per second.